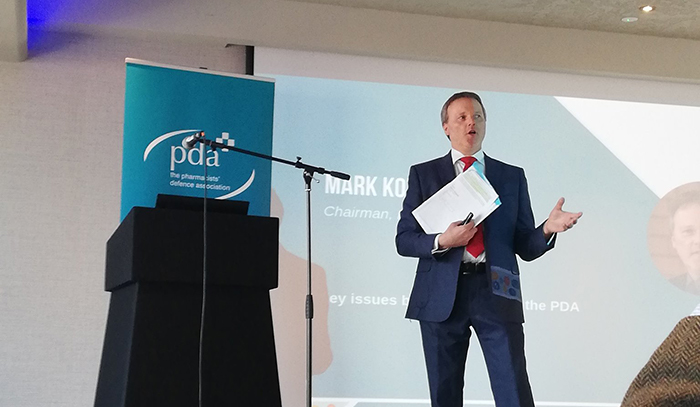 Mr Koziol spoke of this emerging trend at the PDA conference in Birmingham on March 30. Vaccination claims have been common in the US for some time, he said, and are now on the rise in the UK.

The PDA’s regulatory casework has shot up as the number of fitness to practise concerns raised with the General Pharmaceutical Council hits record highs, Mr Koziol said. In 2018 the PDA dealt with 1,155 regulatory cases, its highest annual total.

He contrasted the current levels of FTP hearings with the pre-Harold Shipman era: “When I was first involved with the Royal Pharmaceutical Society in 1993 there were 33 cases against pharmacists in that year. Now the GPhC routinely examines 2,000 cases per year against pharmacists.

“That doesn’t mean [pharmacists are] 275 times worse; it is because the regulatory bar is so low – and we have Shipman to thank for that.”

However, by far the largest share of the PDA’s casework (around 50 per cent) is to do with employer/employee disputes, according to Koziol. As with regulatory cases, 2018 saw the highest ever number of workplace disputes dealt with by the PDA (over 2,400 cases).

“There was a point towards the end of 2018 when virtually every single month we were claiming nearly £100,000 worth of compensation from employers who treated their employees badly,” he said.

Criminal prosecutions form a minority of the PDA’s casework, with 60 cases in 2018, but have risen considerably in the 15 years since the organisation was set up, the conference heard.

“Not the Kumbaya Pharmacists’ Association”

The PDA’s report on the role of the pharmacy technician workforce has had a “Marmite effect”, Mr Koziol told the conference.

Making particular reference to a Pharmacy Magazine editorial that expressed concern about how the PDA report frames the issues, Mr Koziol said of the organisation’s critics: “What part of the title Pharmacists’ Defence Association don’t they understand?”

“We are not the Kumbaya My Lord Pharmacists’ Association,” he said.

Although a “mutually beneficial” relationship between pharmacists and pharmacy technicians in which both enjoy professional fulfilment is “essential” for the community pharmacy sector to succeed, the approach taken by policymakers to date has “driven a toxic and strategic stake through the heart” of this relationship, Mr Koziol believes.

He claimed there are a number of organisations with a vested interest in advancing the role of pharmacy technicians without giving due regard to how this impacts on the community pharmacy sector in general and the pharmacist profession in particular.

The professional press has a responsibility to facilitate debate around this issue, Mr Koziol argued.