Matt Hancock will put me on the naughty step for this and the collective blood pressure at NHS England will hit the roof – but this needs to be said...

Whatever you think about Brexit, it is going to do nothing to improve the medicines supply chain. Every other business sector in the UK is being advised to make preparations for a no-deal situation, but in community pharmacy we have our hands tied behind our backs because we’ve been told not to stockpile.

In fact, pharmacies should have been slowly building a buffer for a long time, because it is obvious our civil servants couldn’t organise a proverbial in a brewery. I’ve had not one, not two but three letters warning me that consequences will follow for anyone daring to disobey the teacher on this issue.

Quite what consequences there could be is unclear as nobody is breaking any laws. In fact, we’ve got a duty of care to make sure we can cope in a no-deal scenario, so we’re all obligated to take reasonable steps to ensure continuity of supply to our patients.

The changes made to the pharmacy contract a couple of years ago have made the situation worse. Now, if we don’t supply a medicine, we don’t get paid, so if we run out of medicines there is no safety net to pay the bills – and the situation could turn quickly from minor inconvenience to business failure.

The situation with price concessions makes it even worse. If there are rumours in the market that something is going short, you either buy it when it is available (and at a relatively normal price), or you risk losing a fortune.

So slow is the DHSC to grant concessions, and even when it does, they often bare no resemblance to the prices we’ve actually had to pay, that every pharmacy I know has little or no confidence in the system. This will no doubt lead to people taking matters into their own hands and buying excessive quantities in order to protect their own businesses and patients. You cannot blame them. If the powers-that-be want to stop this, they need to fix the concession system. 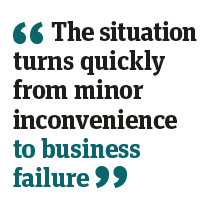 Then we have the Government’s serious shortage protocol – the silver bullet that is going to solve the looming shortage crisis. At the time of writing we are weeks away from this coming into force, but nobody understands what it means or how it is going to work, let alone what we will be paid (if anything). Not going well, is it?

Meanwhile the BMA has had a hissy fit about pharmacists using the protocol without telling doctors first – which defeats the object of reducing the pressure on GP practices. If we are having to let GPs know before we do something, it just adds to both our workloads. Surely it is in their interests to let us get on with it?

It is all right ranting, you may say, but what would you do? Well, for a start, I’d demand that the recent category M clawback is cancelled. Every pound that isn’t in contractors’ pockets right now means less options if we end up with a nodeal outcome. If we’ve got the cash we can buy the stock patients need. If we don’t, we can’t. It is as simple as that.

The clock is ticking and everybody knows it. The wholesalers will seek to use high pressure sales tactics to exploit their customers – “Prices are going up”, “stock is short”, “there is a problem with x”, etc. Surely anyone could see that medicines prices were going to rise in the run-up to Brexit?

The Government’s calamitous approach to its Brexit preparations could not be more obvious than with FMD. We were told we had to have things in place by February 9, but then received a letter the day before saying we should be mindful of the risk of no-deal when signing up to systems (i.e. do as little as possible before we know what is going on). Then we were told there were going to be false warnings – not that there is any stock in the system that is FMD compliant anyway.

If I’d have known how little care the whole supply chain seems to have given FMD, I don’t think I’d have bothered getting ready for it. It will be years before it does what it says on the tin, as there is just not enough product to make it worthwhile scanning. We’ll end up having the disruption of running two systems at the same time, which will be a pain, like it was with EPS and paper prescriptions before we got to the critical mass.

Meanwhile, every counterfeiter on the planet now knows we won’t be checking goods coming into the UK from March…. what could possibly go wrong?

* Pen name of a practising community pharmacist. Alexander Humphries’ views are not necessarily those of Pharmacy Magazine. What do you think should be done to improve the supply chain situation? Email pm@1530.com