One-fifth of lung cancers occur in people who have never smoked. Community pharmacists can raise awareness of this and look out for the early danger signs

There are two main types of primary lung cancer, which behave in different ways and respond to treatment differently. They are:

• Small cell lung cancer (SCLC): accounts for 10-15 per cent of cases of lung cancer. It is strongly correlated with cigarette smoking and is rarely seen in non-smokers. The majority of patients present with extensive stage disease and the one-year survival is 37 per cent. Treatment usually involves chemotherapy and/or radiotherapy.

• Non-small cell lung cancer (NSCLC): accounts for 85 per cent of lung cancer cases. It can be linked to cigarette smoking but it is also the predominant type in non-smokers who develop lung cancer.

Treatment depends on the stage of the disease, presence of metastases (usually brain, liver or bone) and a patient’s overall fitness. Staging takes account of tumour size, affected lymph nodes and metastases. Treatment could include surgical removal of tumour, radiotherapy and/or drug treatment. Surgery can be robot-assisted (e.g. video-assisted thoracoscopic surgery [VATS] – a sort of keyhole surgery for lungs).

In recent years many NSCLCs have been shown to have oncogene drivers – mutated genes that drive proliferation of tumour cells (e.g. EGFR, ALK, ROS-1 mutations). Such cancers are described as ALKpositive or EGFR-positive, etc. In such cases, ‘drugging the driver’ using specific TKIs is now an established approach to treatment.

Immunotherapy uses drugs such as the immune checkpoint inhibitors, nivolumab or pembrolizumab, to ‘take the brakes off’ the immune system to allow the patient’s own T-cells to attack the tumour.

When diagnosed at its earliest stage, more than a third of people with lung cancer will survive their disease for five years or more, compared with around five in 100 people when diagnosed at a later stage. New treatment approaches are gradually improving the outlook for lung cancer patients.

• Persistent cough
• Ongoing chest infections
• Feeling breathless for no reason
• Chest or shoulder pains
• Loss of appetite
• Change in a long-term cough or a cough that gets worse
• Coughing up blood
• Unexplained weight loss
• Unexplained fatigue or lack of energy
• Hoarseness in voice Source: roycastle.org/how-we-help/lung-cancer-information/understand-the-disease/signs-and-symptoms 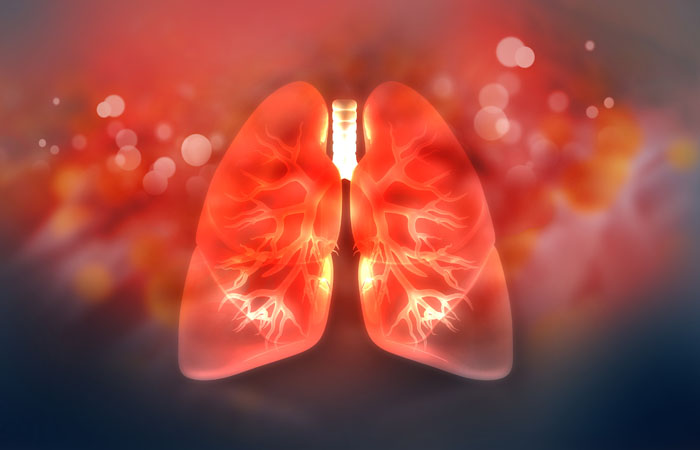 Mesothelioma (malignant mesothelioma) is a cancer that most commonly starts in the layers of tissue covering the lungs (the pleura). It is strongly associated with previous exposure to asbestos. In the UK, about 2,700 people are diagnosed with mesothelioma each year.

The early symptoms of the disease can be non-specific and include breathlessness, chest pain, fatigue and weight loss. Most people who are diagnosed with mesothelioma have an advanced stage of cancer. About five per cent of men and 10 per cent of women survive their mesothelioma for five years or more after diagnosis.

Treatment includes surgery, where possible, radiotherapy, chemotherapy and sometimes treatment for fluid on the lung (pleurodesis for ‘trapped lung’).

William (not real name) was a 68-year-old, self-employed joiner who developed shoulder pain. He had not smoked for over 30 years but had lost weight recently. He assumed his symptoms were due to increased physical exertion as he had been working on a roof. The pain did not subside and when he visited his GP for “excruciating” shoulder pain, he was referred to community physiotherapy.

When this did not relieve his pain, he self-referred for chiropractic, osteopathy and acupuncture – none of which relieved his symptoms. He regularly visited his community pharmacy for painkillers and heat packs for the pain. After a few months he booked a private CT scan at his local hospital trust.

On arrival at the hospital for the scan he collapsed, unable to speak coherently, and was admitted as an emergency. Tests for suspected stroke, dehydration or infection all proved negative, but further investigations revealed advanced lung cancer with multiple metastases to the liver, brain and spine. He died just 10 days later.

The NHS Long Term Plan calls for three-quarters of all cancers to be diagnosed at stages one and two. Early diagnosis is associated with longer survival.

The NELSON study – a large European study of screening for lung cancer – showed that targeted screening of current or former smokers aged 50-75 years resulted in a 26 per cent reduction in lung cancer deaths.

In the UK, the Manchester Lung Health Check scheme, using mobile, low-dose CT scanning (LDCT), demonstrated the feasibility of screening, identifying 80 per cent of cancers at stage one or two. As a result, the scheme is now to be rolled out nationwide.

Current and former smokers aged 55-74 years will be invited for a lung health check and be offered a chest scan, if appropriate. This scan could take place in a mobile unit or in a hospital setting. In the first instance screening will be confined to 10 areas of the country with the highest lung cancer death rates.

As screening is limited to current and former smokers it will not identify ‘never-smokers’, who make up about 20 per cent of lung cancer cases. For this reason, healthcare professionals and the public need to be aware of the early symptoms.

Simon worked for many years as an electrical engineer, often working in old farm, school and hospital buildings. He first visited his GP with chest pain in December 2011, at which time the cause was presumed to be rib fractures. Over the next few months he made frequent visits to his GP as the pain and shortness of breath increased.

By May 2012 he had to give up work because the pain was so severe. By July he found he could no longer sleep in bed because of the pain and in August 2012 he collapsed. The paramedic who attended asked about asbestos exposure and advised Simon to mention it to his doctor.

He underwent a CT scan and the oncologist told him that he had a stage two mesothelioma “that would kill me in three-and-a-half months”, he recalls. The options were chemotherapy or surgery. Although the surgical mortality was 40 per cent at the time, it could offer two years of survival. “It was a no-brainer”, says Simon. He underwent a six-hour operation to remove tumours on the pleura, diaphragm and pericardium followed by radiotherapy.

“As a dad, the thing you most want to do is walk your daughter down the aisle,” he says. He has now been able to do that and become a grandfather. However, he says, he still has considerable pain and feels angry that it took so long to diagnose his condition. Simon now focuses on raising awareness about the dangers of asbestos exposure in the construction industry (see video).

What can you do?

• Recognise patients who could have symptoms (see lung health checklist, above) and signpost them appropriately (e.g. suggest they ask their GP about getting a chest X-ray)
• Provide a lung health checklist for patients to use
• Obtain some leaflets (about lung health/lung cancer) to give out (e.g. from Macmillan, Cancer Research UK, Roy Castle Foundation, British Lung Foundation)
• Encourage smoking cessation. Stress that it is worthwhile even after a diagnosis of lung cancer, COPD, or any other lung or cardiovascular condition
• Find out if you are in a target area for screening – and if so, encourage participation
• Find out about local lung health initiatives and link up with other healthcare practitioners.

Janette is a never-smoker who developed a sudden onset persistent cough, difficulty swallowing, painful sore throat and shortness of breath two weeks after her 52nd birthday. She attended A&E and despite a chest X-ray showing a lesion on her upper left lung, she was discharged with antibiotics/steroids.

Readmitted the following day due to worsening symptoms, she was hospitalised for a week and told the symptoms were due to uncontrolled asthma – a condition that had not troubled her since childhood. These symptoms “felt completely different”, she recalls, and she did not respond to the asthma medication. A later CT/PET scan confirmed the presence of a large mass and she underwent a left upper lobectomy to remove a 7cm tumour. She remains well after eight years.

Janette is now an active patient advocate in cancer research and member of the British Thoracic Oncology Society (BTOG) steering group. “You don’t have to have been a smoker to get lung cancer, as my experience shows. Community pharmacists could help to raise awareness about this, especially if people are buying over-the-counter treatments for persistent cough or other symptoms, or visiting the pharmacy for prescriptions for repeated chest infections that do not appear to respond to medication. They could use a ‘lung health checklist’ to start the conversation,” she says.

Another patient advocate encouraged Janette to get involved in research. A 48-year-old cancer nurse specialist and never-smoker developed a persistent cough but had no apparent chest X-ray changes. After undergoing tests for almost 15 months, she was told she had stage IV lung cancer, not visible on a lateral chest x-ray as the tumour was behind the heart, and less than six months to live.

Targeted therapy – at the time available only via clinical trial – enabled her to live four years and four months beyond this diagnosis. “Many people fear the worst or think their lifestyle may be judged so are reluctant to seek help”, says Janette, “not understanding that there are many treatments for all lung conditions and outcomes are much improved today.

As with all conditions, the earlier something is diagnosed, the more specific the treatment can be. I was back at work and swimming three months after surgery. Treatments have improved in every mode since my diagnosis.” (See video ‘Diagnosing lung cancer – for want of a CXR’, in which Janette tells her story)