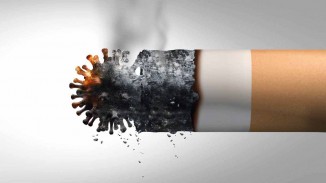 Has Covid helped to cut smoking?

Discover the impact the pandemic has had on levels of smoking in the UK.

Covid-19 has had a mixed impact when it comes to smoking. While smoking rates increased among 18 to 34-year-olds, many other smokers recognised their vulnerability to the virus and had a greater appreciation of their respiratory health

After reading this feature you will be able to:

The effect of Covid-19

The number of 18 to 34-year-olds who smoke increased by 25 per cent in England during the first Covid-19 lockdown, according to research by the University of Sheffield and University College London (UCL). This should not come as a surprise when other studies have shown that younger adults reported higher levels of pandemic-related stress, with increased social isolation.

Mintel also found that 65 per cent of Britain’s smokers were worried that the Covid-19 virus is more dangerous to them as a smoker, and a further 69 per cent said their respiratory health is more important to them now than before the Covid-19 outbreak.

"Healthcare professionals, particularly those in primary care such as pharmacists, have a crucial role to play in transferring people’s broad concerns about health into positive action. Every smoker should know help is out there to stop," says Hazel Cheeseman, deputy chief executive of Action on Smoking and Health (ASH).

Smoking rates among children under 16 years of age have fallen to the lowest recorded levels since surveys began in 1982, yet in England an estimated 280 children still start smoking every day. Young first-time smokers may be influenced by family members, as well as their peers.

Tackling smoking in the younger age groups is essential to prevent long-term health problems. According to ASH, the Government needs to focus on reducing the appeal and availability of e-cigarettes and other nicotine products to children and consult on raising the age of sale for tobacco from 18 to 21 years.

"The reports of increases in the numbers of young people smoking have been very alarming," says Hazel Cheeseman. "A rise in young smoking, if it is sustained over time, would clearly endanger the Government’s ambition of a smoke-free England by 2030. While it can seem that younger people are less interested in quitting, we know most of them regret starting and over half of smokers at any one time are actively considering a quit attempt."

Young smokers may be motivated to quit if they think about improved health and fitness, financial benefits, physical appearance or starting a family. "The sooner people stop smoking, the better," says stop smoking expert Louise Ross.

"The longer someone has smoked, the harder it can be to quit, and younger people should be encouraged to quit before they develop smoking-related diseases such as COPD, heart disease or some cancers. If customers are picking up medicines for respiratory infections, for example, mention that there is a stop smoking service available in the pharmacy and ask if they know of anyone who would benefit."

Smoking is particularly concentrated in young parents, says ASH, so all pregnant smokers should be given financial incentives to quit in addition to smoking cessation support.

Research has found that among mothers whose smoking status was recorded, a quarter of pregnant women under 24 years of age smoked at the time of booking their first maternity appointment. This rose to a third for those under 18, compared to an overall average of 12.7 per cent for all pregnant women.

As well as being more likely to smoke in the first place, younger mothers were less likely to quit before pregnancy.

Community pharmacists should work with healthcare teams to identify the best way to support children and teenagers who smoke, says Jonathan Lloyd Jones, policy and engagement lead for RPS Wales.

"Community pharmacists are well placed to provide advice on the correct use of smoking cessation products, as well as offering behavioural support. Many also provide NHS-funded services, which are free to the public. The service may be provided to any person aged between 12 and 17 years as long as the service provider undertakes an assessment of their competence," he says.

The Cochrane review of behavioural interventions for smoking cessation, published in January 2021, found high certainty evidence that the provision of counselling can increase the success of smoking cessation by 44 per cent compared to no support.

"Beyond lockdown, we have seen fewer smokers using evidence-based support to quit and more trying to quit unaided," says Dr Sarah Jackson, principal research fellow of the tobacco and alcohol research group at UCL. "Given we know people are more likely to quit successfully if they use support, encouraging smokers to use available services and cessation aids will boost their chances of stopping for good."

In October 2021, the National Centre for Smoking Cessation and Training (NCSCT) published a new guidance document: Very Brief Advice on Smoking (VBA)+. This updated model reflects the fact that patients interested in stopping smoking should be referred to the best locally available support. In some areas this will remain the local stop smoking service, while in others this will include trained healthcare professionals in pharmacy or primary care.

Local authorities in England stepped up communications during the pandemic to encourage smokers to quit and this local activity contributed to the highest quit success rate ever recorded (21.6 per cent) and the highest proportion of smokers trying to quit since 2014, with 36.1 per cent of smokers making a quit attempt in 2020. However, says ASH, this needs to be sustained and built upon post-pandemic to achieve the smoke-free 2030 ambition.

Louise Ross says that stop smoking services adapted very well to the pandemic, moving from face-to-face contact to phone calls, Skype or Teams, and many people now seem comfortable with this change in approach.

"Once the rules relaxed, face-to-face conversations returned with certain precautions in place, but a lot of stop smoking services were quite happy to continue as they were," she says. "Some pharmacies may already be using phone calls, but others could give some attention to how they can deliver stop smoking services remotely."

Anti-smoking behaviour change campaigns should be targeted in particular at routine and manual and unemployed smokers (C2DE), says ASH. Additional help should be given to those living in social housing or with mental health conditions, who have high rates of smoking.

In July 2021, ASH research found that three in five households containing smokers living in poverty were in the North and Midlands, while fewer than one in five were in London and the South East. The link between smoking and disadvantage is well established, but this new analysis throws light on how the impact of smoking on local communities is exacerbated when household incomes are also lower.

Nationally one in five smoking households in the UK were living below the poverty line, amounting to a million households. However, when tobacco expenditure was included in the assessment of poverty, this increased to nearly a third, equivalent to 1.5 million households.

"Inequality has been amplified during the pandemic including disparities in population rates of smoking," says Professor Ian Hamilton, associate professor of addiction at the University of York. "Those living in the most deprived areas are more than twice as likely to smoke compared with those in the least deprived.

"At a time when we need investment in smoking cessation services, there have been budget cuts to these evidence based-interventions. Paradoxically these cuts have not been spread evenly; they have been sharpest in the most deprived areas such as Blackpool."

Sophia Papadakis, academic and health systems consultant at the NCSCT, says all pharmacists should be prepared to deliver 'very brief advice'. "VBA is designed to do two things: promote quit attempts and link smokers to evidence-based stop smoking support. VBA can be delivered in any setting and community pharmacists as well as pharmacy staff have a very important role to play in delivering VBA to their customers. It starts by asking a very simple question… 'Do you smoke?' or 'Are you still smoking?'"

The NCSCT has launched a short online VBA training module with CPPE for health and social care professionals to provide them with the knowledge and skills to feel confident in delivering VBA.

The MHRA is looking to encourage manufacturers of e-cigarettes to submit them for approval as a medicinal product in England. Guidance has been updated and the approval process streamlined in a move that “opens the door to a day when smokers can be prescribed e-cigarettes to improve their chances of successfully quitting,” says Deborah Arnott, chief executive of ASH.

"This new guidance demonstrates that the MHRA recognises the value of licensed e-cigarettes as a quitting aid," adds Dr Paul Aveyard, professor of behavioural medicine at Oxford University. "I hope it will encourage e-cigarette companies to apply to the MHRA for licences for their products."

New NICE guidance on smoking cessation is also expected to be published imminently. According to the draft recommendations, put out for consultation in June 2021, healthcare staff should give clear and up-to-date information on e-cigarettes to people who are interested in using them to stop smoking. The expert committee agreed that people should be able to use e-cigarettes as one of several options to support smoking cessation if they so choose.

E-cigarette sales continue to grow, increasing by an estimated 7 per cent in 2020 to reach £214m, according to Mintel research, while sales of other products, such as NRT, declined in value by 3 per cent last year to an estimated £144.1m.

Stopping smoking has short and long-term benefits on hospital outcomes, including lower rates of readmission.

A pilot study of a smoking cessation referral service from secondary care to community pharmacies has been running from September 2020 and will continue until January 2022 when it will be introduced as an advanced service as part of the year three arrangements of the contract in England.

Patients admitted to hospital are being offered smoking cessation support during their admission and, upon discharge, receive a referral to a community pharmacy of their choice for continuing smoking cessation treatment, advice and support.

The ongoing consultation may include behavioural support as well as the supply of NRT and referral to local specialist smoking cessation services if appropriate.

"The NHS Long Term Plan has committed that all people admitted to hospital who smoke will be offered NHS-funded tobacco treatment services while in hospital by 2023-24," says Sophia Papadakis. "We know smoking cessation interventions have proven to be effective for hospitalised patients.

"Countries like Canada have been successful in introducing stop smoking support in the hospital setting and NHSE has been motivated to do the same. This NHSE initiative is still in its early phases but it has the potential to reach hundreds of thousands of smokers in England and prompt them to stop."