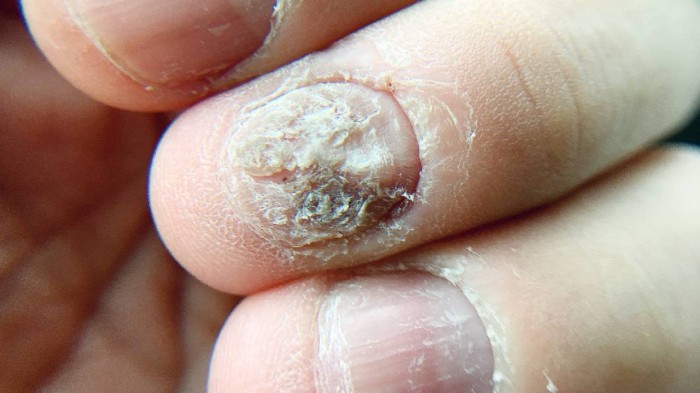 Dermatophytoses are superficial fungal infections of the skin, hair and nails.

The itch from the red, inflamed rash on my stomach was intense. Really intense. I knew I shouldn’t scratch it but I just couldn’t stop myself.

I blamed a contact dermatitis to my belt buckle or thought that my eczema had recurred in an unusual place – but changing the belt and my usual dermatitis treatments didn’t work. As the circular rash emerged, I realised I had ringworm. An antifungal cream cured the infection.

Dermatophytoses, superficial infections of the skin, hair and nails by fungi that feed on keratin, can develop on almost any part of the body including the scalp (tinea capitis), beard (tinea barbae), body (tinea corporis), hand (tinea manuum), groin (tinea cruris), feet (tinea pedis) and nails (onychomycosis; also called tinea unguium).1 As in my case, ringworm (tinea of the body other than nails) is usually easily treated – but do not underestimate dermatophytoses.

Patients with toenail onychomycosis, for example, may find walking painful and buying comfortable shoes difficult.2 Onychomycosis, which accounts for about 50 per cent of nail disorders and approximately 30 per cent of superficial fungal infections, may also allow secondary bacterial infections to develop, which may increase the risk of foot ulcers in people with diabetes.3 Indeed, before the launch of modern antifungals, one dermatologist called onychomycosis “that condition we do not wish on our worst enemies”.4

Numerous dermatophytes picked up from other people, soil and animals can cause tinea, including species of Trichophyton (responsible for infections of skin, hair and nails), Epidermophyton (skin) and Microsporum (skin and hair).1 Trichophyton rubrum and Trichophyton mentagrophytes cause 60-70 per cent of dermatophyte nail infections. Other causes of onychomycosis include non-dermatophyte moulds, such as Scopulariopsis brevicaulis and Aspergillus species.

Yeast onychomycosis, usually caused by species of Candida, is more likely in fingernails, especially in people who frequently immerse their hands in water.5 Some onychomycosis patients have mixed infections.3

Certain dermatophytes are species-specific: T. rubrum “rarely, if ever,” causes disease in non-human animals.6 Other dermatophytes are more promiscuous. Microsporum canis can infect mammalian species as diverse as gibbons, goats and guinea pigs. T. mentagrophytes also infects numerous mammalian species and even chickens. Both can infect humans6, so hands should always be washed after contact with soil or animals. Suggest that people check their skin if they have been in contact with a person or animal with ringworm and take animals to a vet if they have signs of ringworm, such as patches of missing fur.7

Once a dermatophyte spore sticks to skin or nails, the fungus releases enzymes that digest keratin. In response, keratinocytes (the most common cell in the epidermis) release a cocktail of cytokines to destroy the dermophyte1 but the fungal infection can overwhelm these defences.

The cytokines trigger inflammation. The ringworm rash is, typically, red or silver. A ringworm rash may appear darker than the surrounding skin on brown and black skin making it harder to see. The rash may be scaly, dry, swollen or itchy.7 Sweating, friction and an alkaline environment mean that intertriginous areas (e.g. groin, axilla and spaces between toes) are particularly susceptible to ringworm.1

More severe onychomycosis may cause ridging and ingrown nails.5 Occasionally, patients show haemorrhages and may lose the entire nail.2

The infection pattern can offer a clue. In older people, toenail onychomycosis is four times more common than infection of fingernails.3 Unless the patient has experienced trauma or is immunosuppressed, onychomycosis of more than one fingernail is unusual without concomitant toenail infection.5

If a patient presents with tinea, ask if they have onychomycosis or ringworm elsewhere on their body. For instance, many people with onychomycosis (about a quarter of older patients) also have tinea pedis.3

Some people are at particularly high risk. Older men are twice as likely to develop toenail onychomycosis as women3, while older patients with diabetes are between two and three times more likely to develop onychomycosis than people without diabetes.3 Immunosuppressed people (e.g. chemotherapy, steroids or diabetes) should be referred to their GP.7

Onychomycosis is responsible for about half of nail dystrophies.3 Several conditions can, however, mimic onychomycosis including lichen planus, psoriasis, contact dermatitis, paronychia, trauma (e.g. friction from footwear), Bowen’s disease, squamous cell carcinoma and melanoma.2,3 Any cases that are not clearly tinea or that do not respond to treatment should be referred.

The Iroquoian and Algonquian peoples of North America used willow bark to treat fungal skin infections. Willow bark contains salicylic acid, which is anti-inflammatory and antifungal, and is part of Whitfield’s ointment, which was developed in the early 20th century.4,8 Created by London dermatologist Arthur Whitfield, his eponymous ointment also included benzoic acid and became the standard tinea treatment.

In 1955, dermatologist David Williams from King’s College Hospital commented in the BMJ that “after some 50 years it is doubtful whether in practice there is any fungicidal preparation better than Whitfield’s ointment”.4 More than a century since its introduction, Whitfield’s ointment remains in the BNF for tinea.

It is important to remain alert for possible drug-drug interactions and side-effects with some systemic antifungals, especially in older patients, with concomitant diseases.3 Itraconazole potently inhibits CYP3A4 and may increase the serum concentrations of several drugs, such as anti-arrhythmics, benzodiazepines, calcium channel antagonists, HMG-CoA reductase inhibitors (statins) and oral antihyperglycaemics.

Terbinafine inhibits CYP2D6.3 Gupta et al comment that “terbinafine has clinically insignificant drug interactions compared with azoles, so could be a better option in older patients with polypharmacy”.3

To reduce the risk of resistance and increase the likelihood of cure, pharmacists should stress the importance of good compliance.1 This means, for example, applying a topical antifungal for ringworm daily for up to four weeks, even if the rash is no longer visible.7

It is important to find out if there are any problems when applying topical antifungals.3 Antifungals for ringworm are available as creams, gels and sprays7 – so changing the formulation may aid application.

Between 10 and 53 per cent of people find that onychomycosis recurs. The suggestions in Table 2 may help reduce the risk of this happening, which is especially common within two years of a cure.3,5

To avoid ringworm, people should wear loose-fitting clothes made of cotton and avoid sharing bed linen, towels, clothes and shoes. They should wash towels and bedsheets, clothing – especially socks, caps and undergarments – at 60oC minimum or in boiling water, dry well (ideally outside) and iron.1,7 Patients who are obese or sweat excessively should use absorbent powders and deodorants, frequently change their clothes and lose weight.1

People prone to tinea pedis can use antifungal powders to reduce the risk of relapse.1 An infected toenail could act as a reservoir of fungi that spreads to other parts of the body.3 To prevent recurrence of nail infections, tinea pedis in people with onychomycosis needs treatment with topical antifungals.3 Finally, advise people against scratching, which can spread the fungus7 – but that is much more easily said than done.