In the UK, 70 per cent of people with coeliac disease remain undiagnosed as the symptom overlap between the condition, irritable bowel syndrome and non-coeliac gluten sensitivity poses real diagnostic challenges 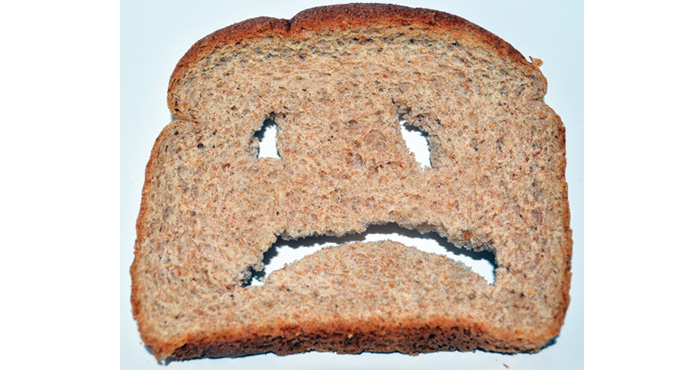 Coeliac disease (CD) affects one in 100 people in the UK, yet only 30 per cent of those with the condition have been formally diagnosed. More needs to be done to accelerate identification of the half a million people currently unaware they have the condition, says Coeliac UK.

“In addition to malnutrition, delaying diagnosis can result in serious long-term problems, such as bone loss and nerve damage,” says Professor David Wright, professor of pharmacy practice at the University of East Anglia. On average, it takes 13 years for a CD diagnosis and the impact can be profound and wide-ranging. Research also shows that quality of life improves by around 30 per cent after a CD diagnosis.

“Greater awareness of the disease amongst frontline healthcare professionals would go a long way towards increasing our detection rate of coeliac disease,” says Dr Charlie Andrews, GP at Mendip Vale Medical Group and committee member of the Primary Care Society for Gastroenterology. However, identifying CD is not without its challenges.

What are the diagnostic challenges?

“The symptoms of coeliac disease, irritable bowel syndrome (IBS) and non-coeliac gluten sensitivity (NCGS) can be very similar and it is not possible to differentiate between the conditions based on symptoms alone. Some one in four adults diagnosed with coeliac disease have previously been misdiagnosed with IBS,” explains Ruth Passmore, Coeliac UK’s health policy officer.

Dr Andrews points out that while all three conditions can cause gastrointestinal symptoms, such as diarrhoea, abdominal pain and bloating, around half of patients are asymptomatic.

A blood test for IgA tissue transglutaminase antibodies is usually required to differentiate between the conditions. “This is present in coeliac disease, but absent in IBS and NCGS,” says Dr Andrews. (NICE IBS guidelines require serological testing for CD as an exclusion measure when diagnosing IBS.)

Currently, CD testing is via a GP practice but a 2016 Coeliac UK pilot study found offering free testing via community pharmacies increased diagnosis rates. The study across 15 community pharmacies identified 9.4 per cent of 551 patients testing positive for CD. Of these, 50.3 per cent were seeking IBS relief and 25.8 per cent help for diarrhoea.

Study author Professor Wright admits that the results were a surprise. “I didn’t expect to find any people with coeliac disease. It shows how silent the disease is. We found general GI discomfort problems were the main symptom for those testing positive, followed by diarrhoea.” Loperamide and mebeverine were the most commonly used drugs triggering the pharmacist’s intervention.

The test used in the study, however, is no longer being manufactured, while other point-of-care tests available are less sensitive and not recommended by Coeliac UK. But pharmacies can still play a role in the recognition of CD without the need for POC testing, says Passmore, as “they are ideally placed to recognise individuals with the symptoms of coeliac disease”.

Professor Wright is mindful that this puts an additional burden on pharmacists. “Community pharmacists have traditionally provided consultations that identify patients at risk of conditions, such as coeliac disease, as part of their routine service. With the removal of the professional allowance, they are now potentially providing significant benefit free to the NHS. Perhaps we need to start considering different models of remuneration that capture this important contribution.”

Regardless of the role pharmacists can and do play in CD diagnosis, greater awareness of the symptom overlap between the condition and other GI problems is necessary. As an example, Coeliac UK research found that just 3 per cent of people are aware that IBS symptoms could also indicate CD. 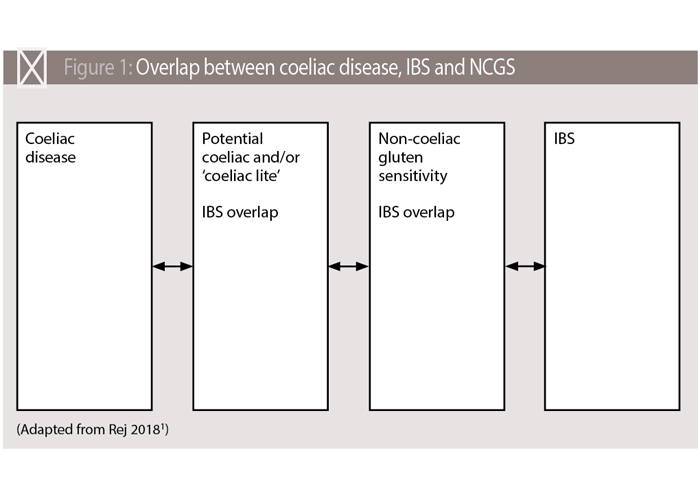 CD is a lifelong autoimmune enteropathy caused by a reaction to gluten, a protein present in wheat, rye and barley. It is genetically linked through the human leucocyte antigen (HLA) gene system. “The risk of having coeliac disease is one in 10 for people with a first-degree family member with the condition,” says Passmore.

For those with CD, gluten ingestion stimulates an immune reaction, with the mucosa of the small intestine triggering an inappropriate inflammatory response to gluten’s protein sequence. The result is a flattening and atrophy of the villi in the small intestine. This reduces the body’s ability to absorb nutrients, causing malabsorption and longer-term sequelae, such as anaemia and osteoporosis. Post-gluten ingestion, symptoms can persist from a few hours to a few days and severity can vary between individuals.

Although CD symptoms are assumed to be primarily gastrointestinal in nature (see Table 1), the condition can affect any area of the body. Among the most common non-GI symptom is dermatitis herpetiform, which affects around one in 3,300 people and is most prevalent among those aged 50-69 years. Others may present with neurological symptoms, which often leads to a further delay in diagnosis of around 10 years, compared with those experiencing GI symptoms. NICE now recommends that people with unexplained neurological symptoms also undergo CD testing.

“Pharmacists can play an important role in the diagnosis of coeliac disease by identifying people who should be offered testing for the condition. Pharmacists can also be alert to people with other autoimmune diseases associated with coeliac disease,” says Passmore. Identifying first-degree relatives of people with CD and recommending that they are tested is also important, she adds, as NICE guidelines recommend testing even if they are asymptomatic. Patients can also be signposted to Coeliac UK’s online assessment.

Professor Wright adds that the mix of GI symptoms and their general mildness means people with CD self-treat. “Pharmacists can plant the idea of gluten intolerance in the patient’s mind so they can then decide how to proceed. I know a number of people who have self-diagnosed CD by adding and removing gluten from their diet to see how they respond.

“I would suggest that they go and have it confirmed by their GP but this is up to the individual. We need to ensure that pharmacy staff ask customers if their symptoms are recurrent and how often they have them. Also ask how they are feeling: are they run down, anaemic, or have constipation?”

Dr Andrews believes pharmacies could improve early diagnosis by offering testing to certain select groups of patients, “such as those with mild IBS-type symptoms”. Patients should be advised to eat a gluten-containing diet for at least six weeks prior to testing. It should be noted that IBS-type symptoms can occur in other conditions, he adds, so even a negative test may still require GP follow-up.

Once diagnosed, Ruth Passmore advises pharmacists to support people with CD in managing their condition, for example by making them aware of recommended vaccinations, such as pneumococcal and meningococcal vaccines. In Scotland, she says, the role of pharmacists in CD has been expanded under the Gluten-Free Food Service to allow them to manage gluten-free food on prescription and invite adults with CD for an annual health check.

A greater awareness that customers presenting with conditions such as IBS, abdominal discomfort and diarrhoea warrant further questioning could help uncover the seven in 10 people living unknowingly with CD and help avoid long-term complications. 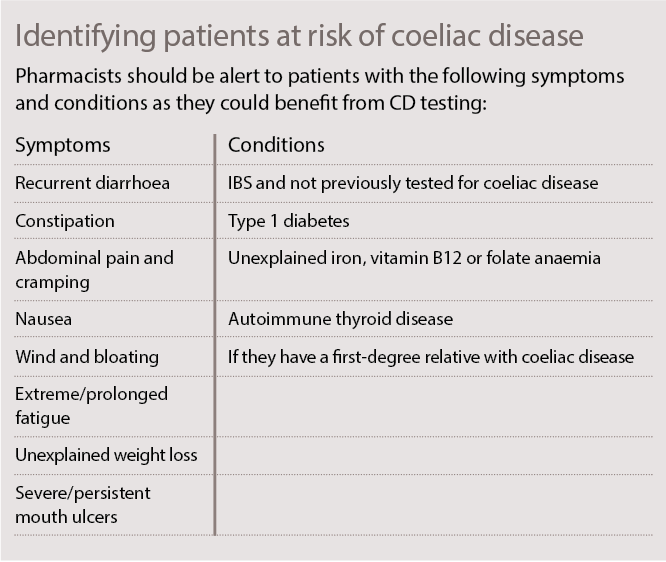 Constipation affects around 14 per cent of adults, most commonly women (particularly pregnant women) and older people. It is also a significant issue in children, with up to 30 per cent of 4-11 year-olds experiencing symptoms.

The impact of constipation on the NHS is also substantial. Constipation in children accounts for 3 per cent of paediatric consultations and chronic constipation resulted in over 66,000 hospital admissions in 2014/15 costing £145m.

Yet these numbers are likely to be an under-reporting of the true scale of constipation. A survey by Coloplast found one in five people would opt to self-resolve rather than speak to anyone.

A complicating issue is there is a deep lack of awareness of what constitutes constipation. The clinical definition is a bowel movement that occurs less than three times a week and where stools are often hard, dry or lumpy. According to NICE, many people don’t recognise the signs and symptoms, with Coloplast’s research finding almost 20 per cent believed constipation meant a bowel movement less than once a day.