Illness caused by the ï¬‚u virus puts significant strain on the healthcare system in any winter – so improving ï¬‚u vaccine uptake rates is always a key priority.

As a letter this year from the chief medical officer to NHS staff points out: “Last season’s higher level of ï¬‚u activity is an important reminder that ï¬‚u can have a significant impact and is highly unpredictable. This year saw record ï¬‚u vaccination levels, with nearly one-and-a-half million more people getting the vaccination than last year. We should strive to further improve vaccine uptake rates in all eligible cohorts.”1

Numark member George Wickham, who owns a group of pharmacies in Devon, describes this year’s ï¬‚u season as difficult to predict. “It has been a messy year with all the changes in schedules and the deliveries,” he says. It was hard for contractors to predict what was needed when ordering aTIV in the spring, he points out, when orders needed to be made quickly after the announcement on the vaccine schedule was made.

“We ordered less vaccine overall than last year, because we thought we were more likely to be left with vaccine than not having enough – so we are predicting a slight reduction in numbers.”

Pharmacies who did not order enough aTIV in time earlier in the year are not able to source extra supplies.

When PM spoke to George in September, he thought it likely that the phased delivery of the aTIV vaccine may cause the over-65s some problems in getting their vaccines at certain times of the month. “I think people may fnd themselves making two or three journeys to either the GP or ourselves to get vaccinated. They may fnd when they turn up that the vaccine isn’t available.”

Many pharmacies tend to use a supply of vaccines within a couple of weeks, and then have two or three weeks to wait before the next delivery. These patients might go to their GP for a vaccination in the meantime.

A further issue has been that some GPs have received batches of adjuvanted trivalent vaccine before pharmacies. Turning away patients because supplies had ran out has been damaging to patients’ confdence in the pharmacy service and the credibility of the service itself. Many pharmacists have expressed their concerns and frustration.

One of the main differences this year has been communicating this new system to patients. “Unfortunately, some patients are not going to get the vaccination as easily as they did in the past, but hopefully next year things will be better,” says George.

The potential for a greater physical response at the site of injection and a greater febrile response from aTIV could also reignite the myth among older patients of “catching the ï¬‚u” from vaccination, George warns, which could affect uptake of the vaccination in the over-65 age group.

The aTIV vaccine Fluad, manufactured by Seqirus, was approved this year by the MHRA for the first time in the UK, although it has a well-established safety and tolerability profile based on its use in Europe and other countries including Canada and the US over 20 years. The main ingredient of the adjuvant (MF59), which strengthens and lengthens the immune response, is squalene oil.

According to the Joint Committee on Vaccination and Immunisation (JCVI), the vaccine offers increased protection from ï¬‚u in people aged 65 years and over, compared to existing non-adjuvanted ï¬‚u vaccines.2

Public Health England predicts that the introduction of the aTIV is likely to be “highly cost effective” due to “large reductions in GP consultations and hospitalisations”.

The vaccines being used in the 2018/19 national ï¬‚u immunisation programme are: 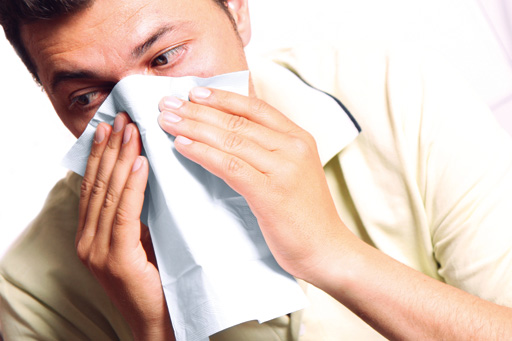 For the 2018-19 season, community pharmacists are able to vaccinate adults in at-risk groups and those working in care homes or domiciliary care. Hospice workers and social care workers have been added to the list this year. Pharmacies offering off-site ï¬‚u vaccination, such as in a care home or in a patient’s home, should inform their local NHS England team.4

A three-phased prioritisation approach should be taken to vaccinating patients aged 65 years and over with aTIV:

Private ï¬‚u vaccination services remain popular with adults who would like annual protection from ï¬‚u but who are not in an at-risk group. Offering ï¬‚u services to local businesses is an additional service that pharmacies may choose to offer. LloydsPharmacy, for example, offers employers full or half-day bookings to give companies the opportunity to protect their workforce from ï¬‚u.

Each year, over 7.6 million working days are lost as the result of ï¬‚u, which can cost a business over £500 per employee. The Lloyds scheme also offers employers vouchers, which staff can redeem at their choice of store.

What to do if aTIV is not available

Most cases of seasonal ï¬‚u occur between December and February, within an eight-to-10 week period – but the season can start earlier. The phased delivery of aTIV means less vaccine will be available at the start of the season. In a joint letter to general practice and community pharmacies, NHS England, the BMA and PSNC advise that with appropriate planning, all patients should be able to be offered protection before the ï¬‚u season starts.

According to the letter, “previous patterns of immunisation suggest that not all of the 65-years-and-over group of patients are immunised early. Data from the weekly ImmForm surveys shows that in 2017/18, 60 per cent were immunised by the end of October, rising to around 70 per cent by the end of November and 72.6 per cent at the end of January”.5

Community pharmacy teams need to work as collaboratively as possible with colleagues in general practice to provide the best possible care for patients, says PSNC. To help overcome supply issues and guide patients to where supply is available, NHS England, PSNC and the BMA have produced guidance to ensure that GPs and community pharmacy teams signpost patients to local providers if they don’t have the recommended vaccine in stock.

Patients over 65 years should not be given the quadrivalent vaccine other than in exceptional circumstances – for instance, if there is no locally accessible supply of aTIV and no further supplies are expected.

PSNC warns any contractor who administers a vaccine other than the recommended one for the relevant age group may be asked by NHS England to justify their decision. “If, in NHS England’s opinion, the clinical justifcation is not satisfactory, the contractor may be deemed to be in breach of the terms of service for this service.”

Further guidance and information on this year’s ï¬‚u vaccination service, including advice on vaccinating patients aged 65 years and over, use of QIV in exceptional circumstances and the contractual consequences of non-compliance, is available on the PSNC website.

It is 100 years since the Spanish ï¬‚u epidemic of 1918, described as one of the most devastating events in human history, killing 50-100 million people worldwide – up to five per cent of the population. The epidemic was the result of an H1N1 virus, which was unusually fatal in those between 20-40 years of age.

The threat of a pandemic remains real and research continues to try to develop a universal ï¬‚u vaccine. Researchers from the University of Oxford recently published a study in Nature Communications showing pre-clinical success for a universal ï¬‚u vaccine, using a mathematical model to look at the evolutionary dynamics of the infectious disease. It is hoped that such a vaccine would potentially give lifelong protection and the same model could be used to design protection against the common cold.

The UK does relatively well in vaccinating the over-65s against ï¬‚u. In 2015, for instance, 71 per cent of those aged over 65 years were vaccinated. However, research from the health economics think-tank International Longevity Centre (ILC-UK) suggests that the country is less good at vaccinating at-risk groups. During the 2016/17 ï¬‚u season, 6.2 million at-risk people did not receive a ï¬‚u vaccine.

“The real big worries are the at-risk groups – pregnant women and those with diabetes and other conditions – who might not realise that they need the ï¬‚u vaccine, as well as making sure that healthcare workers, workers in care homes, residents and even people who visit care homes are all vaccinated,” says ILC-UK director David Sinclair.

We have to make it as easy as possible for people to choose to vaccinate and we have to get the message across that vaccination can be for everyone, he says. We also need to work with the patient groups that work with some of these at-risk groups so people are aware that they can beneft from vaccination.

“For those groups, getting the ï¬‚u may be potentially more severe than for other people. If we can make vaccination as accessible as possible, that makes sense – and the use of pharmacy vaccination services makes absolute sense,” he says.

One of the challenges there always is with seasonal ï¬‚u is that people don’t take it seriously enough, David says, suggesting the pharmacy sector should be asking itself if there is more it could do to get people in their 30s, 40s and 50s to be vaccinated privately.

“[The vaccine] is likely to be more effective in these age groups, and irrespective of effcacy levels you’ll have less people with ï¬‚u as a result. It is not a pleasant disease. “If the vaccine is, say, 50 to 60 per cent effective, people [paying to be vaccinated in pharmacy] will have signifcantly less chance of getting the ï¬‚u. For around £10, that seems like a bargain to me. Compare that to the money people spend on gym membership...”

• The International Longevity Centre is a think-tank that considers policy on longevity, ageing and population change.