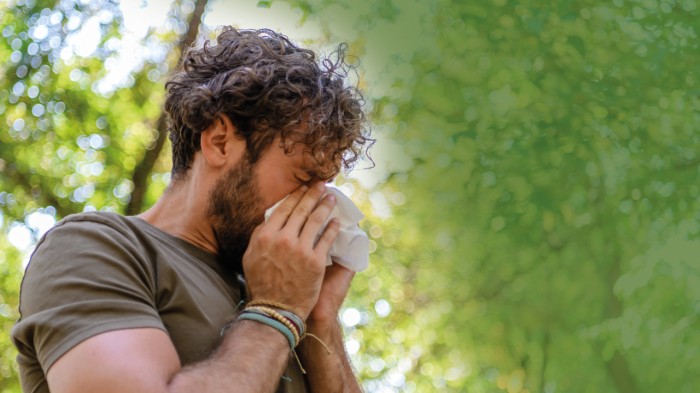 As hayfever season returns, how can pharmacy teams advise customers to manage their symptoms effectively?

Around 49 per cent of people report suffering with hayfever symptoms, according to recent research from Allergy UK

Hayfever is caused by an allergy to the pollen produced by plants and trees and can affect people in different ways – with symptoms including sneezing, coughing, a runny or blocked nose, itchy, red or watery eyes, issues in the upper respiratory tract, and there are a variety of triggers that can make the condition worse.

Increased exposure to airborne irritants such as cigarette smoke can exacerbate hayfever, as can moving house, job or school to a more plant-rich area. Stress can also worsen hayfever as it undermines immune function, and anyone who already has sensitive eyes is more likely to react to pollen in the atmosphere, as their eyes are already inflamed and reactive.

While there is no conclusive answer as to why some people have hayfever and others don’t, evidence suggests allergies may be inherited.

"If your parents suffer from allergies, you will be 30-50 per cent more likely to have allergic reactions," says Hallam Wilshire, pharmacist at John Bell & Croyden. "And there are other risk factors such as additional atopic conditions – having asthma and/or eczema can increase your risk of developing hayfever."

In the UK, pollen exposure is most common in the spring and summer months, but different species of plants pollinate at different times of year, so some people may experience symptoms at specific times and none at others – and climate change is also aggravating the effects of allergies.

“For those that do suffer, it’s likely that the hayfever season will be longer and more intense this summer,” says community pharmacist, Sultan Dajani from GoldenEye. “A US study found the pollen season increased by 20 days and the pollen concentration by 21 per cent between 1990 and 2018, and this change is attributed to climate change and warmer temperatures.”

The most common class of medicines used to treat hayfever are antihistamines – in tablet form, but also as eye drops and creams – which block the effects of histamine, a substance usually released when the body sees itself as under attack from a foreign allergen.

"Under normal circumstances, the body produces histamines to help keep the sufferer alert, attentive and awake", explains Max Wiseberg, creator of HayMax Allergen Barrier Balm, "but hayfever sufferers respond to the presence of allergens by over-producing histamine because their bodies mistakenly identify the allergen as a threat, and too much histamine in the body produces those symptoms all too familiar to hayfever sufferers".

"In tablet form antihistamines will tackle most allergy symptoms including sneezing, itching, and watery eyes but may not help with congestion," says Hallam. "So tablets, sprays and drops can be taken individually or in combination to help combat other symptoms, depending on which the customer is experiencing and how severe they are."

With the pollen season lengthening and intensifying, hayfever sufferers can expect an upsurge in eye inflammation and eye infections, but there are a variety of products that can help.

"Sodium cromoglicate is an ingredient found in many allergy eye drops which is a mast cell modulator and helps reduce the release of histamine in the body," explains Hallam. "These drops need to be applied four times a day to each eye and continued throughout allergy exposure to maintain their effect."

Antiseptic eye drops can be useful in cases of allergic red, sore eyes. "They can help to prevent bacteria multiplying on the surface of the eye and causing an infection", says Sultan, "and if an infection does occur, there is an antibiotic eye ointment available OTC which can be recommended, but it is only for acute bacterial conjunctivitis from allergy related eye infections".

"Some eye drops can also provide a protective barrier to the eye itself, whilst providing helpful lubrication through ingredients such as hyaluronic acid, and soothing qualities through ingredients such as the herb, chamomile," says Dr Richard Middleton, pharmacist and director of the British Herbal Medicines Association. "Look for products that are preservative-free for an additional benefit to those with inflamed, over-sensitive eyes."

Nasal sprays are a convenient OTC treatment whose popularity is on the rise, according to Cathy Crossthwaite, Numark’s OTC business development executive. "Over the last five years, the nasal spray category has increased from a 16 per cent share of space in 2017 to a 19 per cent share in 2021."

"Nasal steroid sprays are most effective at supressing nasal symptoms such as sneezing and congestion but may also relieve other hayfever symptoms like watery eyes", says Hallam, "but they need a week or so to become effective so need to be started ideally before allergy season starts and used regularly to maintain the effect".

Hallam also recommends nasal decongestants such as pseudoephedrine, which are available in tablet and nasal spray form. "These are particularly worthwhile when used in combination with antihistamines to work together to treat all allergy symptoms including congestion", he says, "but should not be used for longer than seven days except on the advice of a doctor".

"This opens up a pharmacy’s offering to a wider customer base", adds Cathy, "as having a drug-free option in place allows pharmacies to support customers who are nervous around medication and whose prescription medication could be impacted by non-natural remedies – and also provides opportunities to showcase other natural remedies to customers, increasing total basket spend".

Pharmacy teams should also keep in mind that for first time sufferers, it can take several attempts to find the remedy which suits their symptoms.

As the pandemic continues, it’s important for people to be able to tell the difference between symptoms of hayfever and Covid-19 in order to protect themselves and others from the virus, and access appropriate treatments where necessary.

"We don’t want people to get unduly anxious about their hayfever, but we also want to make sure that they don’t go out and about, assuming they have their usual allergies, when they may actually have coronavirus and should stay at home", says Dr Gordon Sinclair, GP and clinical chair of NHS Leeds Clinical Commissioning Group.

"The main symptoms of coronavirus are a high temperature, new continuous cough or loss of smell or taste [and] people may also feel quite unwell. Hayfever and allergy symptoms tend to be milder – for example, itchy eyes, sneezing and coughing. While the symptoms of coronavirus and hayfever can overlap, people with hayfever don’t experience a high temperature and most won’t feel unwell," he explains.

Most people with coronavirus can manage their symptoms at home with paracetamol and plenty of fluids. However, pharmacy staff should advise customers to call NHS 111 if they feel worse.

For more advice about self care at home for people with Covid-19, visit the NHS website and search: 'Self-care and treatments for coronavirus (Covid-19)'.

"The best way to treat an allergy is to avoid the allergen entirely, but this may be easier said than done," says Hallam. This means self care advice is an area where pharmacy staff can offer a whole host of simple tips that can make a big difference to customers’ symptoms:

"Pharmacy staff should also advise customers to keep a diary of when symptoms appear, monitoring the severity", says Lucy Morris, Numark patient services manager, "to enable [staff] to provide bespoke one-to-one guidance on the best medication for the individual. For those who want further support, private allergy tests are available in some pharmacies, as well as pharmacy teams being able to advise patients on when they should seek additional support from their GP".

People who suffer from hayfever and allergic asthma are often also allergic to animals, including those with fur, feathers or even scales.

"Although the perception is that it’s animal hair that causes the problem for allergy sufferers, it is actually proteins in the saliva and dander of cats and dogs that trigger reactions for many people," says Alison Cullen, A.Vogel education manager.

"For most people symptoms only show when they encounter two or more things that they are allergic to at the same time," says Tracy Wright, physiotherapist and founder of CleanMyBed, a medical-grade chemical-free allergen removal system. "This is called 'symptom threshold' so, for example, if you are allergic to dogs, dust mites and pollen you may experience no hayfever symptoms until you are breathing in multiple allergic triggers at the same time."