The menopause is something that occurs for half the population. Pharmacy teams can be there to support women going through this natural change and help identify treatments that may help

The menopause is a fact of life for all women of a certain age, but signs of the menopause are often overlooked or misdiagnosed, even by doctors. This can lead to women being misprescribed, such as given antidepressants for menopausal symptoms such as anxiety, depression and insomnia, when in fact hormone replacement therapy (HRT) may be more suitable if the menopause is the cause. 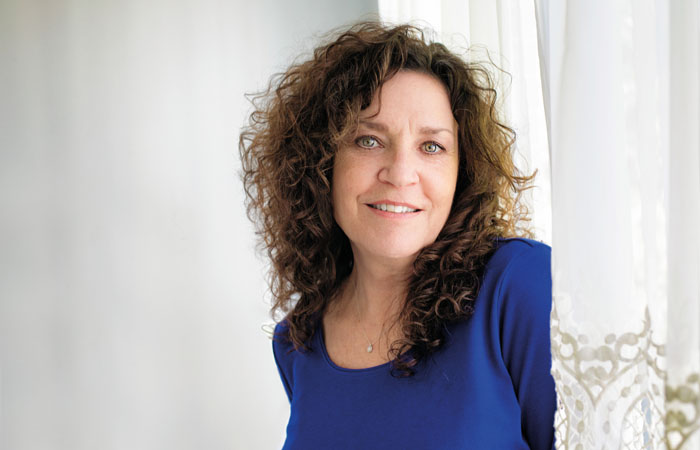 With 70 per cent of women in a recent survey saying that they would visit a pharmacy rather than go to their GP for advice on minor illnesses, according to the Royal Pharmaceutical Society (RPS), pharmacy teams might be the first to spot the signs of menopause in many customers, and help put their minds at rest. So what do teams need to look out for, and how should they start the conversation?

Perimenopause refers to the period of time when symptoms of the menopause start to occur, but before periods have stopped, due to fluctuating levels of oestrogen. Oestrogen not only controls the menstrual cycle, it keeps cholesterol under control, protects bone health, influences the condition of hair and skin, and even affects the heart and brain, including mood.

Perimenopausal symptoms can occur up to 10 years before periods stop altogether, so women can be in their mid-30s or early 40s when symptoms begin, and many women do not realise they are experiencing symptoms, especially if there is no change in their periods.

If a woman is asking about any of these symptoms, and looks like she could be more than 35, Karen says: “A good start would be to discreetly ask her age, then check if any of the other symptoms have cropped up lately. If it’s been a while since she had PMS, it might be the perimenopause. You can also cross check for less well-known signs of perimenopause including difficulty concentrating; forgetfulness; insomnia; hair loss; dry, thinning skin; and weight gain.”

Karen advises that this news can come as a shock, so the key here is to tread carefully: “It’s quite a big adjustment to think that your fertile years are coming to an end, but that said, it’s a relief to know that various things you’ve been feeling can be explained”.

Menopause is defined as the point in time when there have been no periods for a whole year, so identifying this stage is simpler, and customers may be well aware of it themselves.

“If women are over 45 years of age and have irregular periods with symptoms of the menopause, there does not need to be a test to diagnose the menopause”, says GP and menopause specialist Dr Louise Newson.

“However, if the woman is younger than 45 years of age, a blood test is usually carried out to measure the level of follicle stimulating hormone (FSH). If this is raised, then it is very likely a diagnosis of menopause will be made.”

Menopausal symptoms vary tremendously between women, and some will only experience them for a few months whilst others can continue to suffer with symptoms for many years, even after their last period. Louise says: “It can also be common for symptoms to come and go – some months feeling completely normal and other months experiencing unpleasant symptoms which adversely affect quality of life.”

The most common symptoms are:

Louise points out other symptoms that many women may not immediately recognise as menopausal and these are due to changing hormone levels: 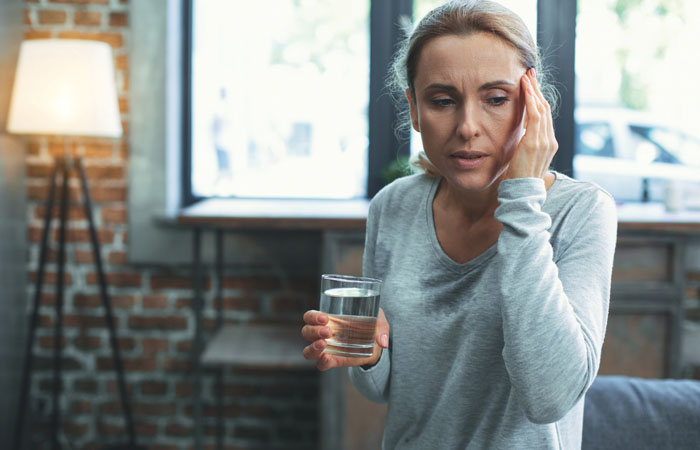 Facing the menopause – and its treatment – can be very isolating and scary for many women. With an estimated 1.5 million women in England aged 50 years or older going through it, being able to open up conversations and help customers realise they are not alone and there are things that will really help, can have a huge positive effect on their lives.

Norma Goldman, pharmacist and founder of The Menopause Exchange, says there is plenty of health promotion advice and self-help lifestyle tips that pharmacy teams can give women struggling with menopausal symptoms.

She says anecdotal feedback from women, particularly for coping with hot flushes and night sweats, includes:

When it comes to products to recommend to help with the symptoms, Norma says it’s worth being familiar with those available over the counter, which include: “products for hot flushes (for example those containing phytoestrogens, black cohosh); products for insomnia; products to help vaginal and bladder problems (vaginal moisturisers and lubricants); products to help memory loss and brain fog, mood swings and emotional symptoms, such as anxiety, depression, and panic disorder; [and those for] dry mouth and eyes.

However, Norma stresses: “Staff need to be aware that some options for coping, such as some complementary medicines, may not be suitable for women who have a history of breast cancer, have other medical conditions or are taking medication or over-the-counter medicines.”

Before publication of the Risks and benefits of oestrogen plus progestin in healthy postmenopausal women study in 2002, many women used HRT to control their menopause symptoms. But after the study, which reported that HRT increased the risk of having a cardiovascular event, as well as the incidence of breast cancer, there was a significant reduction in women using HRT in the UK.

The association between HRT and cardiovascular disease has since been disputed. In addition, National Institute for Health and Care Excellence (NICE) guidelines on menopause say that while the balance of benefits and risks of HRT varies among women, for many the benefits of taking HRT outweigh the risks.

Lynne Robinson, consultant gynaecologist and lead of the fertility and menopause service at Birmingham Women’s Hospital, and a member of the BMS Medical Advisory Council, says healthcare professionals – including pharmacy staff – can reassure women by giving them some perspective.

“On the plus side, HRT has been shown to be cardio protective in women around the age of natural menopause or within 10 years of the menopause, it’s bone protective, and you can reduce your risk if you take moderate exercise,” Lynne adds.

It is also important that pharmacy teams are aware of the different forms and benefits of HRT, since many customers will ask questions about it and some will have concerns about a commonly perceived increased risk of breast cancer.

HRT is available as tablets, skin patches or gel. The patches are usually changed twice a week, the gel is applied to the skin daily, and tablets are usually taken daily.

For starters, Louise says you can reassure women that HRT is “the most effective treatment available to relieve symptoms, and in addition it can help to reduce the health risks associated with the menopause.”

Indeed, most women find all their symptoms improve within a few months of HRT, according to Dr Kate Panter, consultant gynaecologist and obstetrician, and member of the Medical Advisory Council at the British Menopause Society (BMS). She says: “Very often giving women HRT really transforms their lives, particularly addressing the impact of night sweats on sleep. If you don’t sleep you get brain fog, you can’t think clearly, and you feel dreadful, which causes huge problems during the menopause.”

Another positive is that women don’t have to wait until they have finished their periods to start HRT. In fact, Louise says there is “increasing evidence that the earlier HRT is started the more benefits it can give. HRT is also recommended for young women to take following an early menopause until they are at least 51 [the average age of menopause], and for the vast majority of women under 60 the benefits of HRT outweigh the risks.”

Several HRT products are currently experiencing manufacturing and supply issues. These shortages are thought to be temporary and current advice is for women to think about getting their repeat prescription earlier than usual and to see their GP to find a suitable alternative, where necessary.

Vaginal dryness is a common long-term effect of the low oestrogen levels associated with menopause. This is easy to treat, yet not often talked about.

“Vaginal dryness gets worse over time and can become extremely painful in everyday life, not just during sexual intercourse”, says Dr Karen Gardiner, managing director of Purple Orchid Pharma. Even if women don’t use HRT, vaginal moisturisers can help. Dr Kate Panter, consultant gynaecologist and obstetrician, explains that “vaginal oestrogen, which gives a huge amount of comfort, has good results and will also help bladder function too.”

The most well-known risk to women’s health after the menopause is osteoporosis, but timely and continued interventions can help. “The drop in oestrogen levels during the menopause results in increased bone loss which lowers bone density”, explains GP and menopause specialist Dr Louise Newson, “and this increases the risk of osteoporosis developing.”

Osteoporosis is more common in women who do not take HRT after the menopause, and Louise says a way to limit this effect is to ensure vitamin D levels are sufficient (usually 10mcg a day) to encourage good bone health. She says this can be done by “exposure to midday sun for at least 20 minutes, three times a week, every week; having a vitamin D-rich diet; or taking vitamin D supplements.”

Having weak bones puts women at risk of falls, and subsequent fractures, which in elderly people can have a significant mortality rate. “If you fall when you are 80, the mortality rate is something like 25 per cent over the next few months”, says Kate.

As well as making sure diets contain adequate calcium and vitamin D, Kate says weight-bearing exercise is vital for bone protection. “Bones respond to stresses on them”, she explains, “so using heavy weights in slow reps, or taking jerky exercise such as walking or running is good for bone density – and I certainly recommend the Couch to 5K app to my patients.”

Nonetheless, Louise stresses: “HRT is the best treatment for the prevention and also the treatment of osteoporosis. Taking HRT has been shown in many studies to improve bone density and also reduce the risk of fractures occurring. The earlier HRT is taken the better it is for our bone health.”