Keeping an eye on allergies

Over 21 million people in the UK live with one or more allergic disorders – and it's getting worse.

With one of the highest prevalence rates of allergic disease globally, over 21 million people in this country live with one or more allergic disorders, according to patient group Allergy UK – and the situation is getting worse. Good advice is crucial to sufferers.

There are many causes of allergy and while these can be harmless for some people, they can produce reactions in others that can range from mild discomfort to potentially life-threatening.

The most common type of allergy in the UK is seasonal allergic rhinitis (hayfever). A new study by Allergy UK suggests that nearly half (49 per cent) of the population now from it, with more than a third saying they had developed the symptoms for the first time in the past five years.

“There is evidence that suggests climate change, with increasing temperatures, may contribute to extending the grass pollen season in the UK,” says Amena Warner, head of clinical services at Allergy UK.

“Human activities have increased atmospheric concentrations of carbon dioxide and other greenhouse gases. Studies are showing that plants produce more pollen as a response to high atmospheric levels of CO2, and so people may also find that their hayfever is worse when pollution levels are high, especially in warm weather.

“These are the factors that lead us to expect rising pollen levels in the UK in the coming years, triggering the unpleasant symptoms of hayfever over longer periods.”

While hayfever is the predominant cause of allergy at this time of the year, time spent at home during lockdown means other respiratory allergies, such as those caused by house dust mites or pets, could have become more prevalent.

In determining the cause of a patient’s allergy symptoms it is necessary to ask about:

Treatment options are determined by the symptoms and their severity. For people with mild to moderate or mild persistent symptoms the first-line options are an intranasal antihistamine (e.g. azelastine) or a non-sedating oral antihistamine (e.g. cetirizine, loratadine). The former will have a faster onset of action and be more effective. In people in whom these options are not appropriate, an intranasal chromone (e.g. sodium cromoglicate) can be used as required.

Moderate to severe persistent symptoms can be managed with regular use of an intranasal corticosteroid (e.g. mometasone furoate; fluticasone furoate). This can also be used if initial treatment for mild to moderate symptoms is not completely effective.

If symptoms are controlled, treatment should continue until the person is no longer exposed to the allergen. For those allergic to house dust mites, ongoing treatment will be required.

Allergic contact dermatitis is a delayed hypersensitivity reaction that occurs after sensitisation and subsequent re-exposure to a specific allergen. Irritant contact dermatitis is a non-immunological inflammatory reaction caused by the direct physical effects of an irritating substance. It can be difficult to distinguish between these two conditions and there can be common causes.

In allergic contact dermatitis, symptoms normally develop within 24-72 hours. Itch is the main symptom, but there may also be blistering, weeping and/or oedema. In determining the possible cause it is necessary to ask about precipitating, aggravating and relieving factors such as exposure to possible allergens, recent household activities and occupation, as well as previous history of similar rashes.

Once identified, the allergen must be avoided – it can take eight to 12 weeks before there is an improvement in symptoms. Liberal use of emollients and soap substitutes will help to hydrate the skin and relieve symptoms. In some cases topical corticosteroids may be required.

The number of people admitted to hospital after a serious allergic reaction to food has risen by almost 60 per cent over the past five years, according to figures for hospitals in England.

There were 6,632 admissions last year, which is more than 18 admissions every day. In 2,134 of these cases anaphylactic shock occurred  – a 34 per cent rise over the past five years.

Food allergies are believed to be responsible for about 10 deaths a year, with teenagers and people in their early 20s most at risk as they start to make independent food choices.

A food allergy occurs after an individual has been exposed to a particular allergen following exposure and sensitisation. It produces immediate and consistently reproducible symptoms that can affect multiple organs, including the cardiovascular system, skin and GI tract. The reaction commonly occurs after ingestion, but may also occur by inhalation, or when the food comes into contact with the skin.

A food allergy is distinct from food intolerances, which are non-immune mediated reactions to foods and/or food additives that normally have a delayed response. The foods most commonly associated with allergy are nuts, eggs, fish and shellfish, soybean and wheat. Symptoms can include:

Management of people with food allergy includes education about allergen avoidance, the use of oral antihistamines and adrenaline autoinjectors.

Allergy UK is running some masterclasses towards the end of the year including one for pharmacists. The online classes, which are free, to attend are:

Registration for the masterclasses is now open.

New research by the University of East Anglia shows that more than 80 per cent of parents of children with food allergies face significant worry about their child’s condition.

Around 42 per cent of parents meet the clinical cut-off for post-traumatic stress symptoms (PTSS) and 39 per cent report moderate to extremely severe anxiety.

Parents whose children have had to have an adrenaline auto-injector (e.g. an Epipen) administered were seven times more likely to experience PTSS.

“This really highlights the need for greater awareness about the mental health problems that parents of children with food allergies may be experiencing,” says Dr Kate Roberts, who carried out the study. Between 6 and 8 per cent of children suffer a food allergy, with eggs, milk and peanuts the most common causes. Skin testing may help diagnose food allergies. 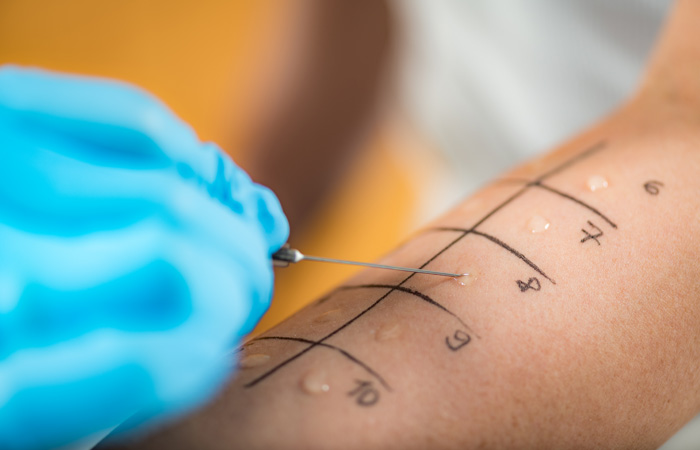 Pharmacy teams must be able to identify the signs and symptoms of anaphylaxis and know how to administer an adrenaline auto-injector if necessary.

Anaphylaxis is a life-threatening generalised or systemic hypersensitivity reaction that is characterised by rapidly developing airway and/or breathing and/or circulation problems, usually associated with skin and mucosal changes.

It can be caused by a broad range of triggers, but the most common are food (e.g. nuts, shellfish), drugs (e.g. penicillin) and venom (e.g. bee stings). Anaphylaxis usually occurs within seconds or minutes of exposure to the allergen.

Angioedema is swelling of deep dermis, subcutaneous or submucosal tissue. It most commonly affects the lips, tongue and eyelids, genitalia, hands or feet and usually occurs with urticaria (also referred to as hives or weals) that results in a red, raised and intensely itchy rash.

Anaphylaxis with or without angioedema is a medical emergency – an ambulance should be called after administration of adrenaline via an auto-injector and CPR may be required. If the adrenaline is ineffective, another dose can be given after five to 15 minutes.

It is important to note that administration instructions vary for the three adrenaline auto-injector products available (Emerade, Jext and EpiPen), different doses are required for children and the products are available in different strengths. 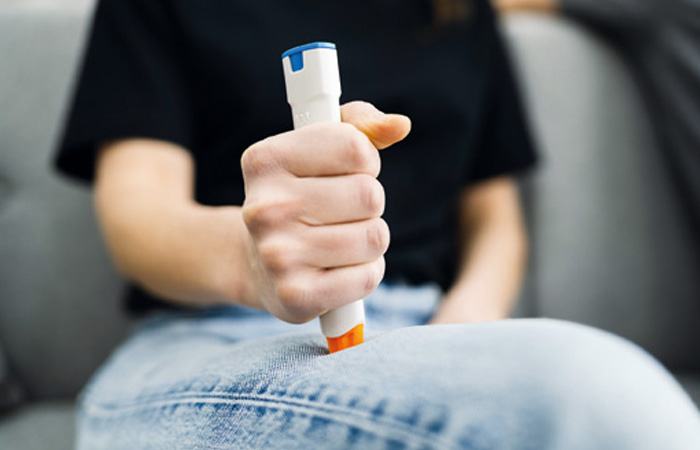